Gravity and the Thermodynamics of Human Economy and Existence

11/20/2019 01:10:00 PM
Gravity and the Thermodynamics of Human Economy and Existence  The prerequisitions of life  The physical order of the material world  The source and the sink  Fast forward to life on Earth  You cannot short-circuit a thermodynamic process and then expect it to go on  A perhaps clearer summary of the above  A Second Opinion  The prerequisitions of life " What an organism feeds upon is negative entropy. ... Thus the device by which an organism maintains itself stationary at a fairly high level of he orderliness (=fairly low level of entropy) really consists continually sucking orderliness from its environment. ... An organism's astonishing gift of concentrating a 'stream of order' on itself and thus escaping that the decay into atomic chaos - of 'drinking orderliness' from a suitable environment - seems to be connected with the presence of the 'aperiodic solids', the chromosome
Post a Comment
Read more
Recent posts

5/22/2021 10:42:00 PM
Order and Complexity in view of Information Order and Complexity have been used almost synonymously in this concept of gravitationally induced order in the universe; and though they are not quite the same, rightfully so. What has been missing is that order and complexity convey information . And this plays into the concept of entropy vs. negentropy (or negative entropy , which, again, does not exist ; what is meant is less entropy.) 1.    One manifestation or concept of entropy is that of disorder ; ergo, the opposite, negative entropy , manifests itself as negative disorder , less disorder or, simply, order . 2.    Another concept describes negative entropy as a measure of the information content of a system; the more entropy a system expresses, the less information it contains: Maximum disorder is maximum disorder. Maximum order is maximum order (which is far more difficult to express or assert). Comparing two identical heaps of children's building blo
Post a Comment
Read more

5/19/2021 09:13:00 PM
Sawdust in the gearbox Or Doping your ancestors The following is anecdotal; and I feel much too lazy to look it up properly right now. Just reminiscing... about times gone by, back when we used to dope our ancestors to death. Ancestors' Comfort This here reminded me of something irritating in my childhood: way back then, people talked ironically of " comforting the ancestors " - and of firing up horses for the race or the sale, like filling sawdust into a worn-out gearbox to have a used car (or horse!) running smoothly for just enough miles to be out of sight and reach when the deception is noticed. Using a poison.    The subject in question: Arsenic , aka Ancestors' Comfort ; that nickname - or so it seemed - being a sarcastic reference to its murderous aim and quality. Arsenic was, as far as I remember, a waste product of silver and lead or sulfur mining; known as a rodent poison to protect the crops, it earned its nickname as " Ancestors'
Post a Comment
Read more

5/17/2021 10:02:00 AM
Chance & Determination The unknown man scoffed.  "Human development was driven by chance and selection. God doesn't exist"  "Al right," I answered. "that puts HIM out of the way, since it is useless to talk about something that doesn't exist. So you - and I - are a product of chance rather than determination?" The man nodded.  "Well, then just by chance, you look very similar to those around you. And no random bone is sticking out of your head. Of course, 99.9% of you is predetermined; chance comes into it at the fuzzy edges, like the color of your eyes - sometimes. 99% of all humans don't have a choice even there. And if more than the hypothetical 0.1% is a purely randomized mutation, you would not have been born alive." The man started to protest. "Darwin... "  "Ask any doctor, and he will tell you. But that is not even the issue here. Of course Darwin was right : man evolved within his surroundings. And tha
Post a Comment
Read more

Revelations of a Scullery Girl

5/15/2021 03:13:00 PM
It is well, at this point, to remind ourselves, that it is we who try to make sense of reality , as it exists; reality does not try to make sense of us . It is we who depend on it existing; it does not depend on us . So what ever we may think of reality, we are unable change it as a whole; our understanding of it has influence only on us as subjects , not on it as the object of this reflection. In this game, reality is the primary entity; we are the secondary .  Imagine a Victorian Kitchen Maid A scullery girl.  The lowest of the lowest of all peasants, illegitimately born and picked out of a ditch, with no mother, no father, no relations; weak-minded, uneducated, unable to speak, to think, let alone to read or write; laden with the lowest and most menial of tasks, all of which involve the cleaning up of other people's mess, and left to endless hours daily of washing the dishes of those ' higher up ', never been out of her dark, wet corner of the general
Post a Comment
Read more

God and the World

4/14/2021 04:01:00 PM
A thermodynamic universe ends up as a cold, dead cloud A gravitational one as today's cosmos This is not about the neo-pagan animism of re-assigning souls to trees, stones or waters, to ask them for permission, forgiveness and protection, and certainly not about addressing a ball of glowing liquid rock (or a dead stone like the Moon), as a living being, by the name of ' Gaia '. Quite to the contrary That could be seen a superstitious expression of a free-floating need for a religious anchor, which 'modern' people once had, but lost, subsequently filling their internal cavernous vacancy with a belief in their own thermodynamics - which theoretically cannot sustain itself, an internal contradiction which is so often blissfully ignored: It is surprising how many people seem to be consciously unaware that the laws of thermodynamics relentlessly apply to themselves as well, individually and collectively. " The LORD giveth, and the LORD taketh away &
Post a Comment
Read more

4/12/2021 06:37:00 PM
Mad Maths TL; DR: S =/= Q/T;   S = T/Q You're welcome. A little math If you want to express the relationship between two quantities A and B, you have two basically equivalent variants to choose from, which do not deliver the same results: x = A / B   and  y = B / A . One is the reciprocal of the other, and both variants can be equally well calculated. Both are equally valid. Both expressions can then be checked, separately, to see if the value of zero might appear (solely) in the denominator of one, or the other. That one needs to be discarded, since the expression is mathematically not defined at this point (and in reality not even in approximation). For entropy , that would be  S = Q / T   and   S(i) = T / Q Checking denominator and numerator for zero: Now, the formula for entropy as  S = Q / T is not defined at T = 0   (independent of Q > 0! ); On the other hand, if Q = 0 , then T = 0 ( T > 0 physically causes Q > 0 )
Post a Comment
Read more

4/09/2021 02:17:00 PM
On Creation Creation did not happen ; it is still going on. The following is intended, inter alia, to shed some light on the phenomenon of how the role of gravity - although generally known - found so surprisingly little entry into the considerations of " What holds this world together innermost ", and how these considerations were focussed more on destructive thermodynamics - that is, to the realm of potential reduction with conservation of mass and energy . Beyond that, however, Creation is a ongoing process in the making , in this very moment ; and this goes far beyond Darwin's concept of ongoing biological evolution, or even of the Earth's geological evolution, both of which were discovered at around the same time . Both concepts hitherto implicit a status quo, some defined point in time and space; however, Creation in this view is eternal , universal and all-encompassing ; it did not just take place everywhere and throughout time , it is
Post a Comment
Read more
More posts 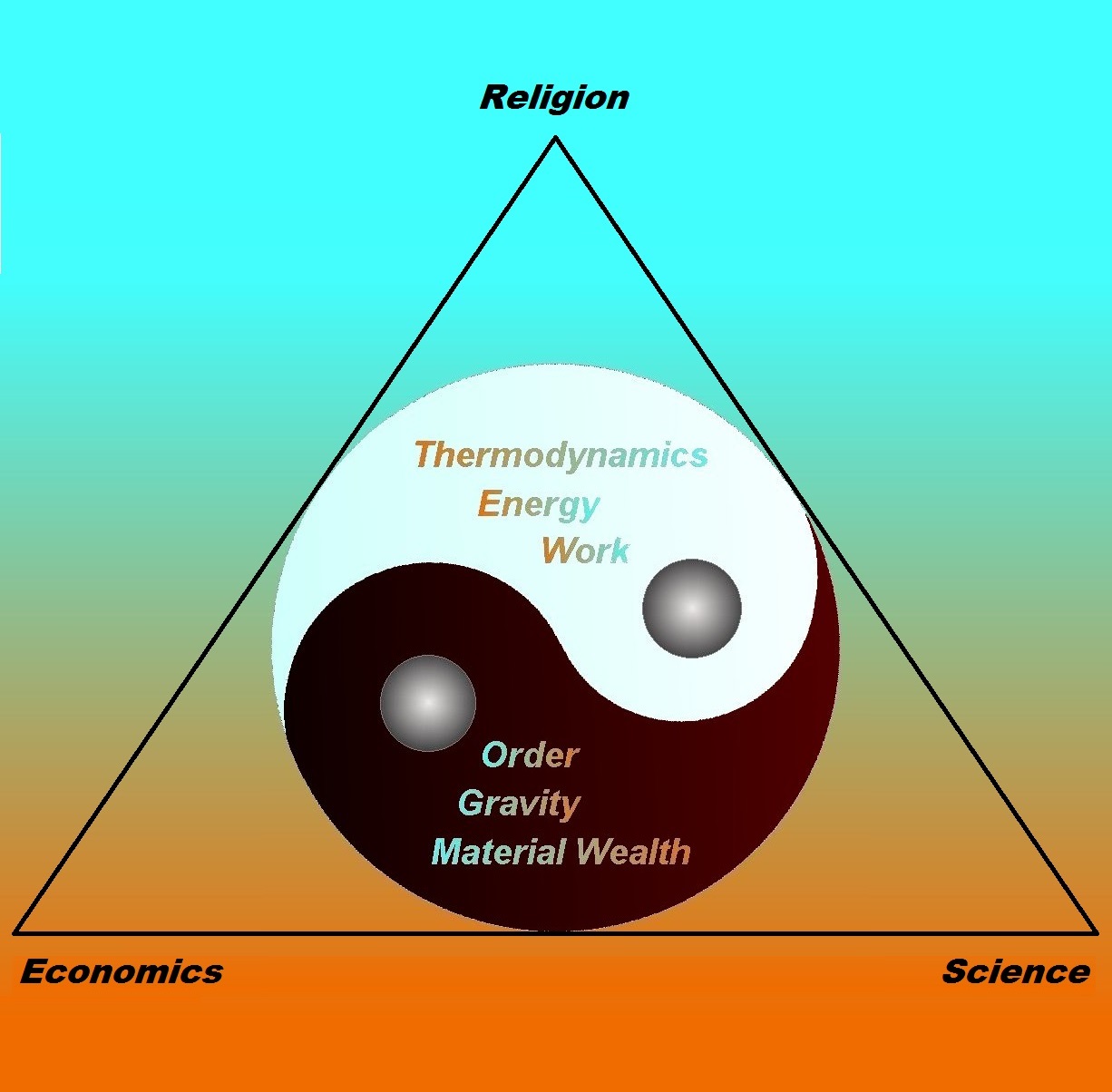